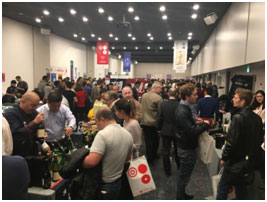 “Salon du Saké”, the European Fair for Sake and Japanese Beverages is :

An urge to discover, taste, understand and appreciate

To learn about the origin of the products, their producer and region, is a true value add in the land of wine and “terroir”,
where saké is unfortunately still considered as another type of Asian spirit. This is the reason why we have decided to propose a framework for the major sake producing regions in Japan. This is the opportunity for them to introduce their Saké and other drinks at stands dedicated to their respective Prefecture or Region, thereby, also highlighting local handicraft and points of interest as well as the potential for tourism.
The following Prefectures have already participated and introduced their regions and “best” products: Hiroshima, Hokkaido, Kagawa, Kyoto as well as Fukuoka, Kumamoto and Oita.
Prefecture “as Guest of Honour in 2015” : Hiroshima

A tasting Event for Sake and Other Japanese Beverages

An opportunity for meeting and networking, exchanging ideas and learning
(over 20 of those activities in 2016) through a large number of:

Cultural Activities and Entertainment (below are examples from previous years, the 2017 program will be announced later)

A great location in the vicinity of the Eiffel Tower:

The New Cap Event Centre, 1-13 Quai de Grenelle Paris 15ème, is located in  the Centre of Paris on the left bank of the Seine River and some 300 meters away from the Eiffel Tower, the Trocadero and next to the Japanese Cultural Centre (“Maison de la Culture du Japon”) in Paris. The Centre has the capacity to host the 2017 Salon du Saké and other Japanese beverages under excellent conditions in terms of comfort and security for both visitors and exhibitors

Access to the Centre is easy, using Subway line N° 6 (exiting at the Bir Hakeim station) or the RER line C (exiting at the Champs de Mars – Tour Eiffel station). Several car parking lots are available in the vicinity. Exhibitors can reserve a parking spot prior to the event.